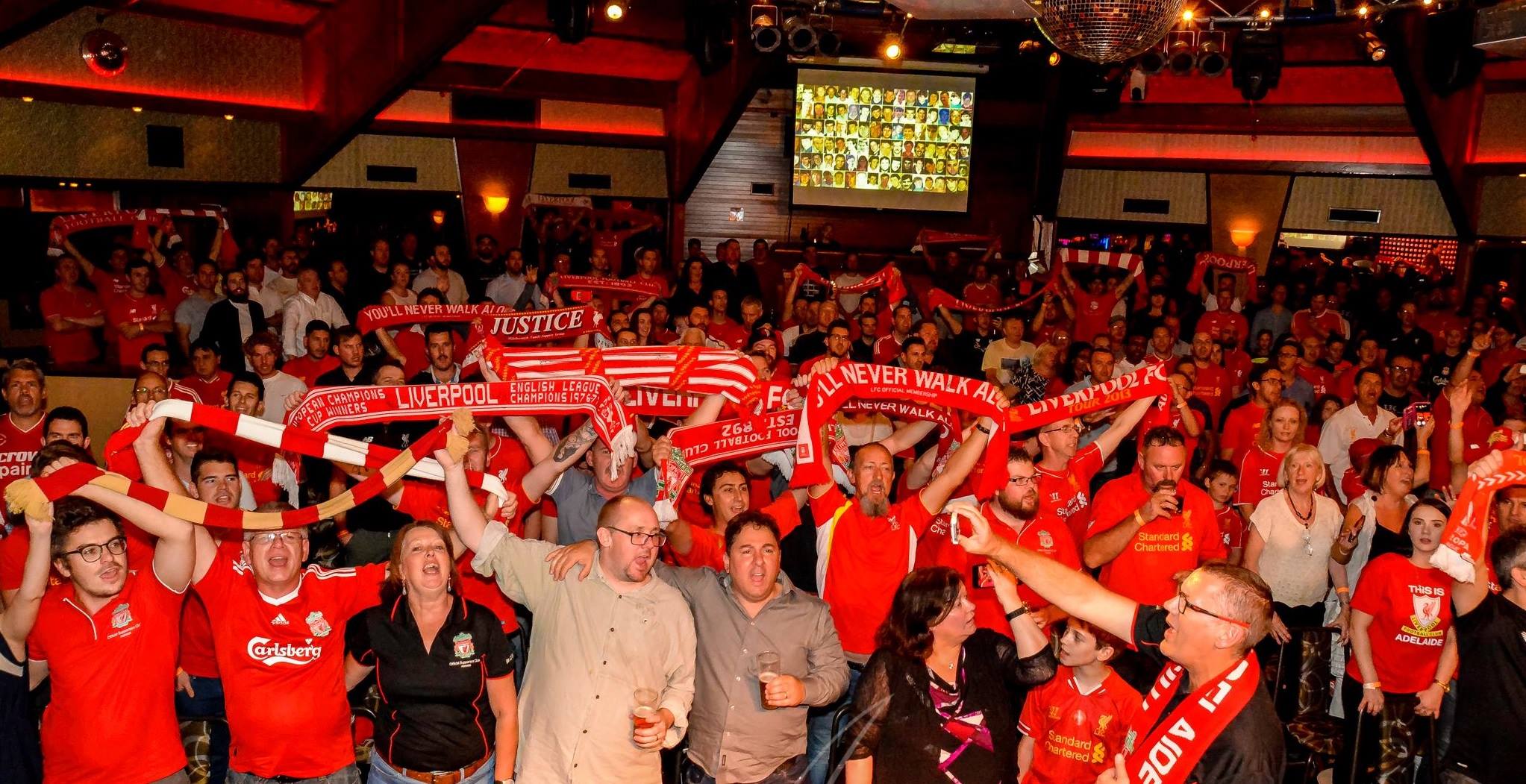 In 2004 a local supporters group was formed,  “LFC Downunder” and then in 2008 LFC Adelaide was officially launched and became part of the Official Liverpool Supporters Club (OLSC) network, with founder Matthew Selby being chair and a committee formed at a meeting at a meeting in  PJ O Brien’s in Adelaide.

The first official venue for gatherings and match viewings  was the Brecknok Hotel in King William St, until it’s closure.

After that a short stint at the Maid and Magpie followed, until we found a new permanent home in the Arkaba in 2014.

LFC Adelaide grew year on year in which time our branch played a significant part in bringing many former LFC players to Australia.

Our membership peaked at almost 1000 financial members in July 2015, when Liverpool FC, as part of their pre-season tour  played against Adelaide United at the iconic Adelaide Oval – and  a three day party was had by all!

After the tour, Matthew stood down and the secretary Steve Trickey took over as Chairman with Tom Denny becoming secretary.

In that time Adelaide welcomed many legends including Bruce Grobbelaar, Robbie Fowler, Ian Rush and John Barnes. We have continued to strengthen our Partnerships with Claymore Wines  and The Arkaba  and we continue to host Adelaide’s biggest football supporter events. (Check out the Gallery for Photos of our Events)

In 2020 a new extended committee was formed and Matthew again become Chairman, after Steve decided to hand over the reins.

How many teams in England or clubs in world football could have 3 out of the back 4 missing and keep a clean sheet?

The Leader, The Captain and most vocal midfielder out injured.

Leading goal scorer out with Covid-19.

Colossus centre back out   injured.  
Creative midfielder goes off injured. Back up right back comes on to shift a 34 year old veteran into the middle with a teenage academy player.

What a time to be alive.
YNWA ... See MoreSee Less

I've been listening to all the experts over the past week, Van Dyke out blah blah, Salah, blah, blah, Hendo, Joey... blah blah, Vardy will terrorise Liverpool’s defence today with his pace blah blah.... yawn.
I sneaked into the Liverpool team hotel on Saturday night to hear how they were preparing for the game, here’s a word for word transcript of the team meeting.
Mr Klopp in the team hotel last night talking to his squad.
Mr Klopp.. “Okay boys, Gabby Agbonlahor, thinks Leicester are going to win 3-1 tomorrow”
Milner. “Who” ?
Mr Klopp. “I was driving to get a Toxteth Fried Chicken last night and some Meff with an annoying brummie accent said Leicester are favourites to beat us, Gabby Agbonlahor I think he said his name was, did he play for Villa” ?
Curtis Jones. “Never heard of the beaut boss”
Milner. “Oh yeah... he was absolutely garbage”
Mr Klopp. “Okay, never mind him, who is Darren Gough” ?
Milner. “Used to play Cricket boss”
Mr Klopp. “Eh..... what” ?
Milner. “Cri.... oh it doesn’t matter”
Mr Klopp. “Well whoever he is, he also thinks Leicester will win...... John Motson ? Who did he play for” ?
Hendo. “He used to be on MOTD boss, very, very boring, I mean really boring, makes Millie look like the life and soul of the party”
Mr Klopp. Well it seems, everyone has an opinion on us, it seems everyone is an expert on who I should and shouldn’t play, Okay, hands up, who is fit to play.... 1... 2..... 3...... 4........ 5..6.... Thanks Kenny but I think we’re okay...... 7...8...9....10..... Mo, put your hand down and get yourself off to your room and isolate like you’ve been told.... 11..... 12.... 13.... 14.... Okay, security, how has Healey snuck in again, I won’t tell you again... Out !! 15.... 16... that’s fine we’re okay. Millie, you’re captain, where do you want to play” ?
Milner. “Don’t mind boss, right back” ?
Mr Klopp. “Good... that’s that sorted, Curtis, sit in that midfield and play like you’ve been playing there for the past 10 years”
Curtis Jones. “Sound boss”
Mr Klopp. “Sadio... stop weight lifting whilst running on the treadmill”
Mane. “Sorry Boss”
Mr Klopp. “Robbo, how’s the hammy” ?
Robbo. “Aye.... ran a couple of marathons this morning boss, it’s fine”.
Mr Klopp. “Bobby, that Healey lad told me he dreamt that you’d score a header against Leicester, can you make this happen” ?
Bobby “Sure Boss, no worries”
Mr Klopp. “Nico.... does your mum know you’re here” ?
Nico. “She’s waiting for me in the car outside boss, I need to leave in a minute, she’ll kill me if I am late again”
Mr Klopp. “Okay, haha, on the bench tomorrow Nico, don’t worry, you’ll get a game...... right any questions ? ...... apart from Healey..... yes Virgil” ?
VVD “Can I play boss” ?
Mr Klopp “Give it a couple more weeks Virg..... right, anymore questions ? No ? Good.... myself and the coaches have scouted Leicester, they are particularly vulnerable at the back, the boy Evans has got a head like a sheriffs badge, make sure all crosses are aimed for the Manc divs bonce, right, meeting over, everyone except Nico can stay up for MOTD, Millie, take Nico to his mum, make sure you cross the road with him”.
Mr Klopp. “Right.... time for a Steiner”.

Paul chats with us about how he got involved in radio, VAR discrepancies, and the situation surrounding the pandemic.

Coolio! Got me a new doormat! ... See MoreSee Less